I started exploring the desktop for performance soon after I realized I was a sloppy programmer and a haphazard VJ.

In 2002, I was experimenting with circuit bending Vtech Video Painters. By rewiring the physical (circuit) interface, I had opened an alternative pathway/backdoor that seemed to subvert the intention(s) of the designed system. I ended up building a new physical interface for one and called it the “Vitch“—like “video + glitch”  or “visual + itch.”

still output from the vitch

I had designed the Vitch with momentary switches so I could play it like an instrument. I soon began doing glitchy realtime video with folks. Nicholas Collins included the Vitch in his Handmade Electronic Music book on hardware hacking. He invited me to visit his class at the School of the Art Institute of Chicago. I shared my warez along-side another Chicago-based hardware hacker: Jason Soliday. We ended up doing an impromptu A/V set for the class… Over the years, we’ve continued the conversation Nic started by introducing us.

I began collaborating with Jason and Rob Ray (deadtech) under the name I♥Presets in 2003. As we began regularly working together, I became super interested in their respective processes. The equation for I♥P goes like this: Rob works primarily with mangling digital audio; pillaging samples and disfiguring filters. Jason exploits and develops homebrew analogue/digital patches and hacked electronics. I began experimenting with and adding more ins & outs / odds & ends to my setup.

While trying to “mix” video, I became antsy during playing back and found myself drawn to the moments when my heart would race; moments when I would screw up and my mouse would be on the screen or I would do the wrong key-command and the brushed metal QuickTime window would swoop into view. As I thought about it, and as we discussed as a group—in the context of I Love Presets—system obfuscation doesn’t matter… So, I began showing my mouse and using OS elements such as the desktop, windows, icons, and applications as additional layers to my system.

Showing my mouse was a rush—as a user/performer, I was exposed. Many visualists cringe at the thought of it. I see the mouse as an extension of the self. At presentations, on screencasts, even on abandoned kiosks, the mouse reflects the intentions of the user against the backdrop of the restrictions imposed by the designer of the system.

In contemporary-computer-culture, watching someone’s mouse is as close as we’ve come to a realtime port into their brain.

Though realtime software tools for video existed at that time, including: NATO, GEM, Image/ine, Isadora, and the beginning of Jitter, I was already disillusioned by video. I had been burned by the promise of digital video in the past. I was interested (and invested as a freelance laborer) in what I perceived as a more seductive realtime experience: “edit, execute, run, or refresh” was more enticing than “edit, render, playback.”

Another collaboration I co-founded around that time was criticalartware. The group has had many wonderful folks cycle through. Around August 2004, it consisted of jonCates, bensyverson, and myself. We were invited by Christiane Paul to participate on the Artistic Tools & DIY Networks [Open Source and Software as Culture] at ISEA in Helsinki, Finland. I developed a glitched desktop as an interface for our presentation. We presented alongside Adam Hyde, Mary Flanagan, and Ken Perlin. That year ISEA had embarked upon a seemingly elaborate conference scheme of a Baltic cruise. Making the Helsinki leg of the Networked Experience was excellent, but it was just the beginning of criticalartware’s trek.

We had opted not to cruise in favor of spending our money to head to Aarhus, Denmark. We had been following the work of Olga Goriunova and Alexei Shulgin and others in their organization of the README festivals (2002-2005) and the launch of RUNME.ORG (2003). We were fortunate to have the opportunity to participate in the Runme Dorkbot citycamp component of README 2004.

TOPLAP
“TOPLAP was born in a smoky Hamburg bar at 1am on Sunday 15th February 2004.” TOPLAP did a presentation at README entitled “Live Algorithm Programming and a Temporary Organisation for its Promotion.” In the presentation, members of the open-ended organization, outlined their manifesto and shared implementation experiences. Later, the livecoding trio slub also did a performance at rum46.

There are many comparisons to be made between software and music. For example, both exist as a set of instructions to be interpreted and executed to produce a temporal form. – toplap

Though I’m more of a scavenger than an architect, I respect and enjoy TOPLAP’S commitment to live algorithmic virtuosity.

WIMP
WIMP is an acronym for “Windows, Icons, Menus, Pointer.” It’s also a conceptual VJ-tool developed by Alexei Shulgin and Victor Laskin that generates images right out of the GUI of Widows XP, flipping the notion of “form follows function” on its head. WIMP upgrades the banal OS elements to dynamic ingredients for visual performance, preferably accompanied by some “four on the floor.”

I caught it in use at README. I still remember the feeling invoked by witnessing it. VJ Wimp was moving windows around the desktop, ala JODI’s OSS—but then there was a moment that threw me off balance… The windows started spinning in Z-Space and the desktop sank into the distance. For me, it was akin to waking down a flight of stairs and expecting to hit the ground, but there’s one more stair… That feeling at that moment continues to inspire me.

Unexpected behavior of common Windows makes you meditate about techno-determinism. We call it misuse of technology; we do it consciously; we create the new beauty. – Alexei Shulgin 2005

JODI && My%Desktop
Joan Heemskerk and Dirk Paesmans‘s talents for invoking, finding, and sustaining mistakes is exhilarating. They weren’t at README, however, criticalartware had the opportunity to meet with them in Chicago in 2006 when they were in town to show Max Payne Cheats Only at Conversations at the Edge at the Gene Siskel Film Center.

My%20Desktop is a series of screen recordings from 2002-2010, spanning multiple OS upgrades and industry touted UI “enhancements.” I became familiar with the online version at http://mydesktop.jodi.org/ which features an unknown user procariously stumbling through the Mac OS.

I love it. If watching the mouse is like seeing inside a user’s brain, with JODI, something is getting scrambled along the way. In 2008, I curated a screening titled: Creative Problem Creating and included My%Desktop 10.4.9. It’s funny. It’s frustrating. It captures and amplifies the irritating feeling below the surface when one is trying/wanting to guide a Luddite through a computer process or problem. 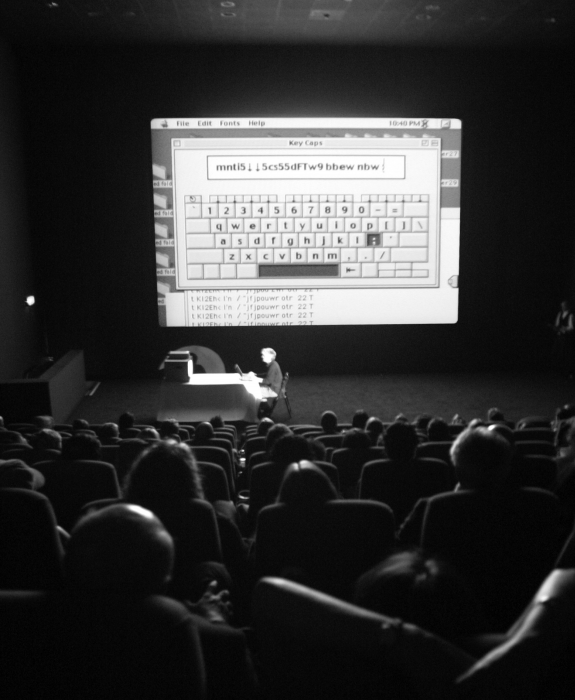 I have since learned that the work was performed (JODI’s first realtime performance) at FACT Centre in Liverpool in 2004 as a part of their solo show: Computing 101B.

In a sense, it operates like a ‘hack’ of  live coding and live music, that uses improvisation as creative method. – Geoff Cox

My work with the desktop, specifically the Prepared Desktop, has grown out of a critical approach to software and a consistant curiosity of how things are made and why they are made like they are.

In an ever evolving digital existence, we witness UI enhancements and upgrades that are later scrapped for new approaches and new paradigms. It’s a fluid language where the elements are immediately recognized and the little big details can encourage or limit behavior, potentially steering culture.

The work has been informed and inspired by my conspiring with I♥Presets, by the transparency and virtuosity of TOPLAP, by the playfulness of WIMP, by the revolutionary work of JODI, and by the conversations and collaborations with folks in the Chicago dirty-new-media community. It’s positioned  to continue the ongoing conversation(s) of using, misusing, remixing, and modding the tools and systems around us. 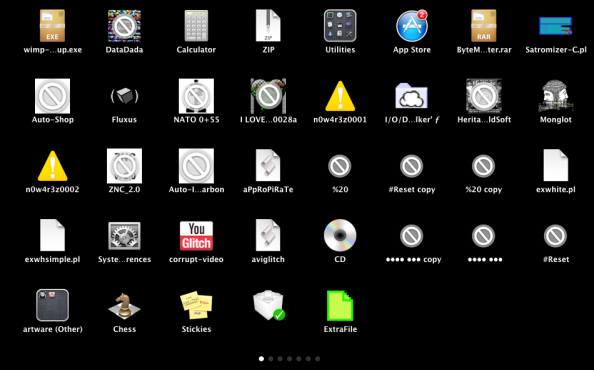